Does Emotional Intimacy Mean I Lose Who I Am?

In the beginning couples feel emotionally connected. It's natural and easy and seemingly enduring. So how can we lose it?

Let's start looking at intimacy, what it is and how to build it. We're going to start with Emotional Intimacy or To 'Get' One Another. So what is it? First off it is being one.

24For this reason a man will leave his father and mother and be united to his wife, and they will become one flesh. 25 The man and his wife were both naked, and they felt no shame.

Two coming together into one in some way is the clear picture, with the physical oneness being foundational to the picture. One flesh. But flesh isn't all that becomes connected. Souls are connected too.

We aren't talking about being an enmeshed blob here as the model. Mark Laaser uses hula hoops to make this illustration. To represent the couple he lays two hula hoops on the ground with one slightly overlapping the other. They are not laid directly on top of each other because husband and wife maintain an individual identity. The self isn't totally lost. They aren't laid next to each other because there is some overlap as a couple unites in marriage. So each person remains an individual and oneness develops. To use colors let's say Ann's hoop is red and mine is yellow, our common area would be orange. But we don't lose our redness or yellowness. 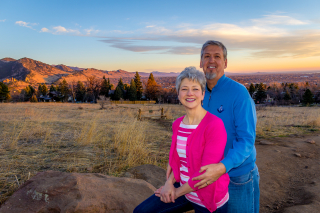 The Trinity provides an example of oneness.

“So this was God in relationship? It was beautiful and so appealing. He knew that it didn’t matter whose fault it was – what was truly important here was the love they had for one another and the fullness it brought them.”    ~The Shack, William P. Young

This is written right after Mack walks in on Jesus, Papa (Father God) and Sarayu (Holy Spirit) laughing about Jesus having dropped a bowl of some dish being prepared for dinner. How often do we treat the ones we love in this way? Are you able to laugh about a mishap rather than blaming one another? Seeing beyond a mishap to the importance of our relationship is essential in building oneness.

Darrell Johnson quotes Thomas Torrence in his great little book, Experiencing The Trinity, "God draws near to us in such a way as to draw us near to himself within the circle of his knowing of himself."

God doesn't lose who God is because he draws us into the circle of relating of the Trinity and we don't lose who we are in that sense. We are in relationship not overtaken and turned into a robot. So it should be with your spouse.

Betrayed and Betrayer: Rescuing Your Marriage by Ben and Ann Wilson