Be Intentional, Be Curious, Be For, To Develop Emotional Intimacy

First off you must BE INTENTIONAL. We are going to beat the intentional drum until you are weary from the pounding in your ears. Intimacy doesn’t just magically happen, you have to develop it. Dallas Willard talks about VIM. Vision Intention Means.

In the aftermath of an affair getting to a place of having hope in the relationship is challenging. Having a vision for a close, fun, trusting relationship has vacated the radar. For me I had a vision for what our relationship could be. I just didn't think it was possible for it to ever occur under my power. Out of gratitude to God I committed to stay and work on the relationship toward that vision. I intentionally showed up and made myself available each day as best I could. My prayer was, God, I really don't see a way to make it to the other side of this thing. But maybe you do. Help me have the courage to show up to see what you can do in me and us. In some ways, it was a prayer of intentionality. In that intentionality, God supplied the means to make the 'miracle' happen in our marriage. 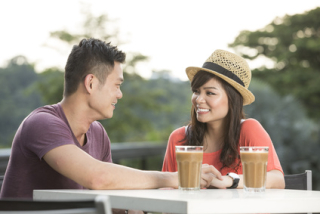 One of the means he provided was to have Ann and I Talk and talk and talk some more. There wasn't any need to hold back and keep secrets anymore. We began to share openly and honestly in ways we had never done. Man was it messy. Anger, pain, tears and snot were everywhere. It was beautiful.

We shared our stories with regards to the life events during our marriage and before. I never knew how hard the early years were in our marriage for her. She felt abandoned as I floundered in life lost in an alcoholic fog. I shared the pain that pounded in my soul each and every day. I ached that among other things she was having the affair when we bought and sold houses, bought and sold our homes together. We shared more often and more honestly than we ever had before. Our emotional intimacy skyrocketed even with all the tension in our home.

We became more Curious about the inner world of our souls. The more Ann told me the more I realized I didn't know about her feelings and dreams and pain. There was much I didn't know about her even though we'd been together for thirteen years. There was much I never told her but assumed she knew about me since it rattled around inside me every day. That was a bad assumption. I had to learn to tell her what felt obvious about me to her. Because it wasn't really obvious to anyone else.

We learned a key element in having a dynamic relationship instead of a static one. If we are always growing, there will always be something new to find out about one another! There is always more for me to learn and discover about her. God is infinite inside of us. Ponder that one for a bit. I submit to you that if you are bored with your spouse it has more to do with you than him or her.

In your talks be Honest. Ann and I still had other secrets from each other that came out after her affair came to light. I had a couple one night stands while we dated that I had told her about before, but there was a third relationship that went on for a semester or so that I had concealed. Having those secrets kept me from really connecting with her.  Secrets are like watermelons protruding out front that don't allow a couple to be close.

It wasn't just those big secrets that were important. Being honest in the little day to day emotions was essential too. Ann had become a good and frequent liar. After the revelation, I would notice her lying to the kids in different areas. I confronted her on them and let her know there was no way I could rebuild trust if she was lying in any areas of her life. She had lied so often it had become second nature. We both did all we could to be honest though it was indeed a process of growth.

Scripture gives us a great command in this area,

Here’s what I want you to do: Tell the truth, the whole truth, when you speak. Do the right thing by one another.

Remember this pithy but profound saying, You can have honesty without intimacy, but you can’t have intimacy without honesty. If you don't have the depth of relationship you desire, take stock and see how many ways you conceal truth from your spouse. Get rid of those watermelons between you and be intentional about not having secrets large or small.

Now I get that sometimes honesty hasn't felt safe because you guys didn't do conflict well. When conflict goes poorly it's tough to come back just as open again. So learn to do conflict in way that you are for one another. Remember Be For – Do not ‘shoot one another down’ in your honesty. Your honesty is about your internal world. As you share your internal world remember that you are on the same team, the same side. It may not always feel like it right now, but the more you can develop that mindset, that this is our deal not just his or her deal, the sooner you'll be emotionally intimate in ways that didn't seem possible at the chaotic genesis of this journey.

Betrayed and Betrayer by Ben and Ann Wilson on Amazon