You are not a Mistake

The next several posts are from Ann as she discusses her journey with shame.

You Are Not a Mistake

Guilt says I made a mistake. Shame says I am a mistake.

Did I feel guilt over my affair? You betcha. I knew I was making a mistake by being in the bed of another. I remember the voice of guilt rising only to be quieted by my selfish voice saying “It’s okay. God will forgive you.” What a way to cheapen God’s grace.

Then shame began to rise in my soul. Rather than sorrow over the guilt of my hideous choices, I began to hide and believe the lies that I had zero value and zero grace. You see, the root of the word shame means to cover. So I hid my exposed ugliness. I didn’t want others to see my soul that was now covered in the dust, dirt and mud of the trashy road I’d been traveling. I backed out of responsibilities. I would duck in and out of church only long enough to say I’d been there, not truly to worship. I stayed home every chance I could, unusual for my extroverted self. I wore clothes two sizes too big so no one would notice my figure or me. My hiding gave shame plenty of room to attack my soul at the core of my being.

Shame began to whisper that I was a failure. “What have you done? You’ve screwed up your life. No one will believe your testimony now.”

Shame began to tell me that I was inadequate. “You’ll never be able to make this right. You couldn’t even get it right to begin with. Why even try?”

Shame began to shout that I was worthless. “You are lower than dirt. You are no longer worthy to be called a daughter of God.”

Have you heard those voices? Have you listened to them? Have you believed them? Me too. I believed them for far too long. They were like the shady characters hanging out on the side of that trashy road just waiting to attack. And attack they did. They delighted in robbing me of dignity, hope and any semblance of trust. I didn’t trust others. I certainly didn’t trust myself. I made hideous choices. And I wasn’t quite sure I trusted God. Why didn’t he drag me off that trashy road sooner?

The answer has less to do with Him and more to do with me. I was unwilling for too many years to stay in His grip. I would wriggle free every chance I got, uncomfortable in His grip of Grace. Oh, His precious embrace wasn’t suffocating or too tight. I just wasn’t able to surrender my soul to the One who made it.

How have you hidden, past and present, as a result of your shame? What lies do you hear from shame? 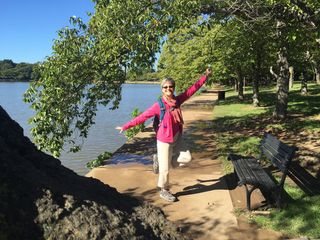 From Betrayed and Betrayer by Ben and Ann Wilson