The Teeter Totter of Recovery 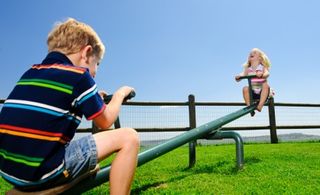 The time frame from about five to seven months post affair was brutal for me. I'm an American. I own a microwave oven. Stuff isn't supposed to take this long. I discovered my soul isn't a frozen pizza. And neither is yours.

Throughout the fourteen months until a huge leap of forgiveness took place, part of me wanted out every day. It was especially so roughly six months in. I felt trapped. The pain droned on inside me like an endless REO Speedwagon ballad. I'm just gonna keep on tormentin' yooooooouuuuuuuuu.

It had been six months for crying out loud and sometimes not so out or loud. The crying came in many forms. I didn't think I could deal with it anymore. REO was on another verse, the flight response kicked in and I called my lawyer friend, Matt, who was also a groomsman in our wedding.

There are risky moments in any affair recovery where the marriage balance teeters and totters. I was ready to bail out on my side and send Ann crashing to the ground. God had other ideas in having me call Matt.

"Ann's had an affair. We've been trying to work through it, but I'm done. Should I get a lawyer in KC or can you help me out?"

Matt replied, "Ben maybe this is what you need to do. But I deal with this stuff every day. Everyone thinks they'll go through it and it won't be so bad. It's always harder than people imagine it will be. It starts off ok and then mistrust kicks in and anger and then it just gets mean. And it hurts. It just rips people up. There is so much pain in divorce. Ben, if there is any way, stay and keep working on it."

Matt spoke profound words of life to me when I desperately needed to hear them.

My wife of 30 years just gave me a big smooch. She is wonderful and I'm glad we're married and stayed married and like being married to one another. I have no idea what my life would be if Matt hadn't been a great friend to me in that moment on the phone.

Are you tired of being in pain? Are you worn out and wondering if the pain will ever go away? It does hurt. Hurts a lot. Of course, part of you wants out and divorce can seem like a decent option.

But if there is any way, stay and keep working on it. Eventually the pain can go away and joy restored in your relationship. Your marriage can be better than anything your imagination allows at the moment. But it's a slow cook deal. It can't be rushed.

So God and Matt, thank you from the bottom of my heart. When I was about to make a great mistake you helped me glide down and gently touch the ground. I landed, looked up and I saw the bride of my youth. She hurt me bad. Your words gave me the courage to gently push off skyward and keep the balance as we teetered and tottered along.

Betrayed and Betrayer: Rescuing your marriage from the affair by Ben and Ann Wilson