How Me and Seve Whooped Wally and the Barefoot Boy: A tribute to my father

My brother Bret died on December 15th. In my teens and early twenties I was my dad's main partner on the course, but after that Bret filled that role. My dad misses him in many ways. Here are some words from former teammate and head pro at A.L. Gustin in Columbia, Jim Knoesel,

"As for stories, the one that will stick out in my mind always about Bret is from the Phil Cotton a couple years ago (2011 I believe).  No one in the state of Missouri over 50 was playing better golf than Jeff Johnson.  He had won every senior event that year coming into the Cotton.  He ended up winning the Cotton as well, but Bret hung with him the entire second round while playing together in the final group.  Jeff had to make a breaking eight foot putt on #18 for par to seal the win.  I was out there watching quite a bit of that last nine and Bret played some great golf.  He made three or four 8-15 foot putts and kept Jeff uncomfortable the entire time.  It was great golf by them both and really fun to watch.  Bret was a hell of a competitor that day and played some really impressive golf.  He had no back up in him that afternoon and I will always remember that about him." 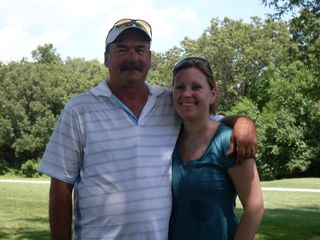 That's Bret and his daughter Amy above. And today is my dad's 77th birthday. Happy birthday just doesn't seem to cut it this year. So with nothing better to say, "Here is to your Red Grange birthday, dad. I love you." 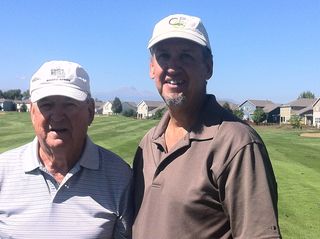 Happy 76th Dad! That's us above on the 12th at Ute Creek in Longmont this fall. We walked all 18. He's tough to keep up with.

One year my wife wrote a tribute to her dad as cancer was in the process of doing it's thing on him.  I wrote this one (and post it each year) to my father remembering all the time we spent together playing golf and competing in golf tournaments.  He is 74 today.  Happy birthday, Dad.

winning the MGA Father/Son Super Senior with you this year at Porto Cima.

That's him out of the front bunker on 18 at Pebble Beach last March (actually March 05) with Stillwater Cove in the background.

My Dad's birthday is December 24th.  It's kinda hard to have a real special birthday when that guy named Jesus also had one the next day every year. :)  I gave this to my dad on Father's Day this year.  Thanks Dad.  Happy Birthday.

How Me and Seve whooped Wally and the Barefoot Boy: A tribute to my father

It was a gorgeous early June day near the Rocky Mountain foothills. I enjoyed the crispness of the air, the lack of humidity and the southern big sky view from my back deck. I thought it made a great day for grilling and wanted something top of the line so I headed to Tony’s Specialty Meats. At Tony’s I looked through the glass at swordfish, crab, salmon and continued moving to my left to the beef. I saw the Filet Mignon. $14.99 per lb. I gasped.

In the early eighties, my dad and I used to win filets playing in golf tournaments in Boonville, Missouri. They came in boxes of twenty. You won four boxes per person for 1st, three for 2nd, two for 3rd, one for 4th and maybe a dozen balls for 5th. I gasped at the price of filets in Tony’s because my wife and I used to use those filets for stew meat! In our twenties, in our naiveté, we were living the high life in our little rented red house on a slab.

Usually the primary competition from Boonville consisted of Wally and the Barefoot Boy. Wally was a forty-something, portly, pear-shaped man who liked his bourbon and coke when he played. He was easy going with a fluid, smooth golf swing.

The Barefoot Boy was a little younger and taller and shoeless and scarier. He was about 6’5” and strong. Imagine Hulk Hogan, his Fu-Manchu, with brown hair and dark prescription sunglasses. That was the Barefoot Boy. The Barefoot Boy put the F-U in Fu-Manchu. His drink of choice was Miller beer in 8 oz., pony size bottles. At some point the men in Boonville got tired of getting their butts kicked by him on the golf course so they passed a rule that shoes had to be worn by all players. He got the thinnest pair of moccasins he could find and kept on playing. Wally and the Barefoot Boy were both generally good company to tour the greens.

Continue reading "How Me and Seve Whooped Wally and the Barefoot Boy: A tribute to my father" »