From TPC to Kabul Golf Course

It was a lot of fun watching KJ Choi beat David Toms at the Tournament Players Championship.  KJ pocketed 1.7million and Toms a little over a million.  They both love the game but neither one holds a candle to the pro I was with last year at this time.  I played on the sand greens at KGC in Kabul, Afghanistan where the pro is Mohammed Azfal Abdul.

Abdul has had his course shut down twice, maybe three times.  The first time was by the Soviets and the second time by the Taliban and in between those two by the mujahideen. The Russians and Taliban put him jail. He did prison time for loving golf and running a golf course. Ian Poultier ran on the golf course on Saturday because he was worried about a few hours of sleep.  Imagine him if tanks were cresting the hills.

See the video at the end of the story to hear more from Mr. Abdul.

Kabul is about the same elevation as Denver, 5000 ft.  KGC sits up in the mountains to the west of Kabul about like Evergreen sits up above Denver.  The skies were dark blue, the temp in the mid 70's on one of the most memorable golfing days of my life. It was right up there with playing the Old Course in the morning and Carnoustie in the afternoon the previous May.

At KGC I had two caddies.  One carried the clubs and the other was a forecaddie who carried around a circle of astroturf.  Each time after a drive I had a perfect lie waiting for me on the carpet.  I'm not sure he didn't give me a foot wedge here and there when he was over a hill to help me along.  I didn't need too much help.  I hit it solid and shot a couple under par.  The course measures a little under 6000 yards.

Among the features are a working well 15 yards in front of the 4th green, a driveable par 4.  There is an inoperable Russian tank standing guard on the ridge to the south of the course and the turquois waters of Lake Qarga behind the 10th tee.  And sand greens.  The sand has oil in it so it won't blow away and is receptive to a shot flown onto it.  I could have used some advice from former Missouri sand green greats, Ken Lanning and Francis Hagan. 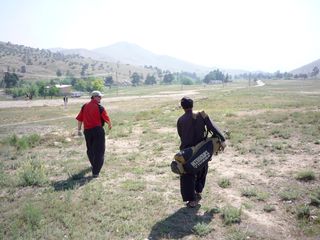 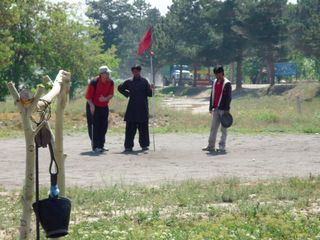 The well on the 4th.  A great tee shot but I missed my eagle putt. 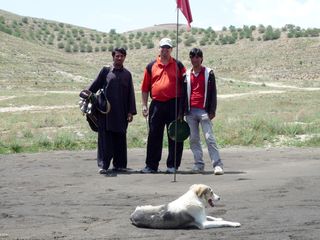 The guys were a little embarrassed and were trying to shoo the dog away.  I liked the little guy so they let him stay.  One of my favorite shots of the trip. The flagsticks were made from rebar. 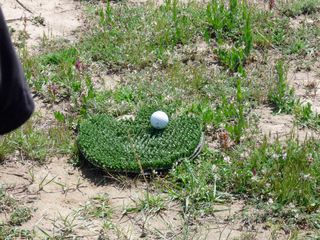 As good as zoysia every time. 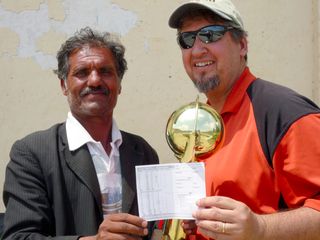 Mr. Abdul was joking around that my score would win the trophy for his tournament next week.  If only I could have played in it.  We had marriage seminars, stress seminars, a singles discussion group and a worship service to lead.  I'll plan my next trip there around the golf tournament. 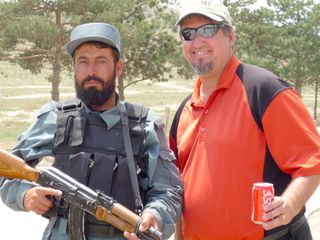 I felt very safe in Kabul.

Mr. Abdul was happy to get some clubs for the boys.

Mr Abdul talks about the trials and tribulations and joy of running Kabul Golf Course through the years.  He could use the help from the USGA and the First Tee to really get things going for junior golf in Kabul.

So congrats to KJ Choi on his great play this weekend.  I hope it leads to victory in a major. But give me sand greens, astroturf, an old minefield now a fairway (cleared out first by sheep and then by the US Army) and a well weathered pro.  I've learned I don't need 1.7 million to feel rich when I play golf.