Rocky and a Happy 25th 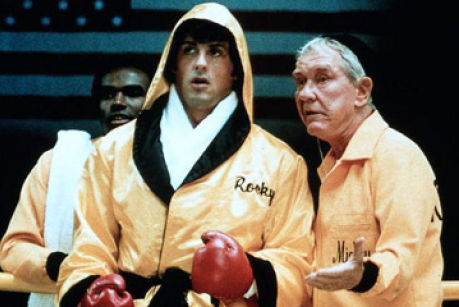 Rocky was fighting in the street.  It was Rocky V when he was over the hill.  Tommy Morrison had just knocked Stallone down in the gutter.  All the knockdowns in Rocky's life come racing through his mind and suddenly an image of Burgess Meredith, Mickey comes in and spits/yells, 'Get up you sonova@#$%&!

And that line helped save my marriage a couple months past my 10th anniversary in '95.

It was 14 months after I learned about Ann's affair.  I didn't think I'd ever really be able to forgive her. About 6 months after the disclosure the pain was so intense and had been going on half a year for crying out loud that I didn't think I could stand it anymore.  I called my lawyer friend Matt for info on divorces in Missouri. He urged me to keep Ann as my favorite.  She'd made a mistake.  He said he dealt with divorces every day and if there is any way to stay with Ann to do it.

The first cut is the deepest. Try to love again.

And so I stayed and we processed some more.  In truth our relationship was better than it had ever been as we reflected on our lives and understood more of who we are and how we became that way.  As we came to the end of ourselves more than ever and learned more deeply what it meant to hang on to God. There was still a lot of hurt and a long way to go.

So 8 months later we had continued on with the process but I still ached inside.  I knew my sin more.  I knew more about what to call my emotional entanglement/emotional affair/emotional fantasy with another woman.  I knew my heart had let go of Ann and gone elsewhere. Yet I still anguished over Ann's betrayal.

My friend Gary had mentioned the Christian men's meeting in Dallas coming up in November.  I told him I didn't know about that.  But I arranged for the days off.  In my twisted thought, I imagined I could find another woman and go somewhere.  It would be nice to be wanted.  I felt so rejected by Ann.  It was the eternal choice that's always right there in some way. Good/Evil.  Dostoevsky had the bar and the church as neighbors in Brothers Karamazov to illustrate the moment by moment choice we all have.  Do I choose to numb my soul or do I stay in the pain and trust the invisible One?

Well, I really did ask one woman to go and thankfully she said no.  And then...I'm not making this up Dave Barry...Gary called and said, "We have one more seat on the bus for Dallas.  Do you want to go?"  With angst and resignation I said, "Yes."  I imagine most men sound more excited to get a colonoscopy than I did to go to Dallas.

But when I was a kid I loved Roger Staubach and all those 4th quarter victories he pulled out for the Cowboys.  So the thought of going to Texas Stadium and hanging out where he won all those games delighted the little boy in me.  But I wasn't going to get all caught up in all the hoopla.

I got into that one seat. And 14 months after the revelation of Ann's affair I strolled into Texas Stadium.

On August 3rd, 2010, almost fifteen years after that man relayed to all us men in Texas Stadium to "Get up you sonofa@#$%&" and be a man of God and live with courage and strength and integrity, Ann and I celebrated the 25th anniversary of our wedding day.  That day was a lot of fun.  But it was the next day when the significance of it all and how close we came to not making it to our 25th came like a left hook crashing into the front of my brain.

Even a line from a bad movie can be used for kingdom purposes.

So I say to you men that don't know what else to do in your marriage, who are hurting and confused, who are ready to toss your white towel into the ring, "Get up you sonava@#$%&!"