Marriages Restored at The Well

Portland was outstanding!!  First, the Viva La Difference conference seemed to go 'Well'.  I was impressed with the hearts and souls of the sixty or so men and women who attended.  There is tremendous depth, no pun intended, there.  These are men and women who are really seeking after God and who aren't just looking to do church.

Here are our friends, Jeff and Joanne with us after the conference.  They believed in us and brought us to Portland.  We're relieved it went well and ready to see some sights and they look exhausted having put in lots of hard work to pull this off.  The Vices, Tom, Teresa, Travis, Tim and spouses were also workhorses in putting this all together.  Thanks! We are posing just in front of where Martin Luther King preached in the 60's.  Lots of history in this old building that used to be known as Mt. Olivet. 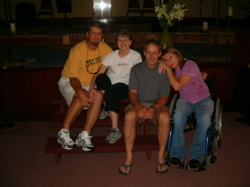 Jeff and Jo are top of the line.  We had a blast the entire time we were laughing and hanging together and being goofy and talking about deeper stuff and seeing Oregon.

I think Tim Vice got ahold of our camera.

The sanctuary at The Well was ancient edgy.  Look over his shoulder at some of the stained glass.  Throughout the room there was stained glass with story telling, soul catching paintings in between.  It's a cool place.

After the conference our friends from Denver who live in Seattle now, Norm and Lisa met us and we all went out east to see Multnomah Falls and the Columbia River Gorge.  The colors out there were so vivid.  Missouri is green, Denver is tan and Oregon is an electric crayola box. 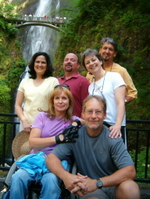 Lisa kinda looks like she's wearing the falls as a bridal veil.  She and Norm will be married 10 years in August the day before Ann and I celebrate our 22nd.

We moved on to the 'Vista' and it truly was. 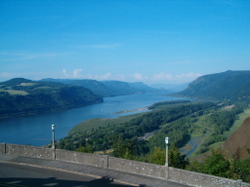 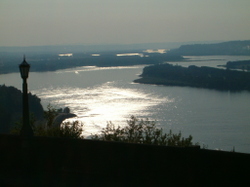 The next morning we met Norm and Lisa at Powell's.  They had books and books and books.  And a nice coffee shop.  Could have stayed there all day but we had to get going farther west and they headed farther north.   Jeff and Joanne took us here.

After a while I really had to go. 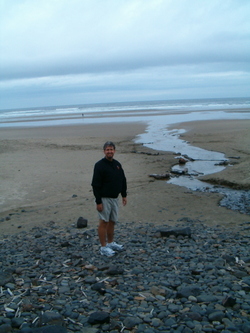 Jeff took his Suburban out on the beach and we found some new kitchen furniture!  I've been trying to conceal Ann's drinking problem.  Actually, the bottle came with the furniture for free. It was a fabulous trip.  Beauty, friendship, fun, God, male, female, MLK, and good coffee.  Really good coffee in Oregon.  And it is free at The Well every Sunday morning at 1000.